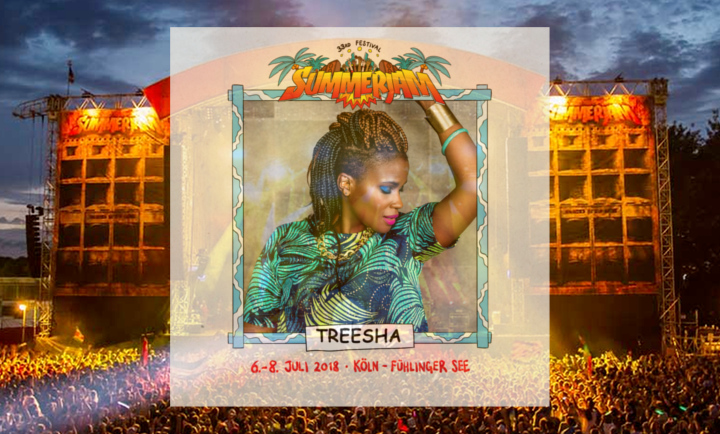 Treesha was born in Nairobi, Kenya as Patricia Wambui Mwaura and is the last of four children. Her path to become a musician was paved early. First by her name Wambui which means Singer of songs in Kikuyu. And second by her father – the late John Ben Mwaura – who played the guitar and sang to her.

She discovered her own voice at the age of 8 years and joined a school choir, which she later on became the leader of. Besides the school choir, she became a member of a church gospel choir in Nairobi, where she widened her vocal range and received profound knowledge of harmonies.

After settling in Cologne, Germany in her teenage years, she finished her high school education and became a Medical Assistant. Besides her job, she became a regularly requested recording and live artist for the local music scene in Cologne. The diverse experience with harmonies and different music styles in her early years helped her tremendously, for this purpose.

In 2012 she joined the German Reggae singer Gentleman & The Evolution Band, and brought her performance and singing skills to new heights through extended stage experience on a global world-class level. Besides Gentleman, she has worked for and with other artists, including Oceana.

Another milestone was the release of her debut album ‘Listen’ in 2015. Significantly involved in this project were Denham Smith (co-writer) and the Evolution Band, who produced most of the instrumentals on the album. It also gained a refreshing diversity of musical styles through other well known producers such as Oneness, Ben Bazzazian and DJ Densen. Besides Reggae, which is the glue of her oeuvre, influences of RnB, Pop, Hip Hop, Dancehall and African music spice up her songs.

Songs from the album like ‘Love You Like 123’ (feat. Skarra Mucci) and ‘We Need Love’ (feat. Denham Smith) ascended to the number 1 rankings in the German Reggae Charts and successfully defended their positions for over a month. During the same time period, ‘Don’t Do It’ was represented in the charts as well.